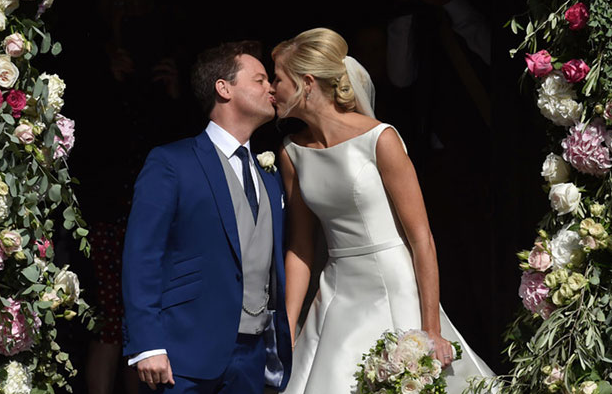 2. Mila Kunis and Ashton Kutcher
Although Kunis, 32, and Kutcher, 37, still haven’t publicly spoken about getting married, Kutcher’s “Two and a Half Men” co-star Jon Cryer confirmed the two wed over the July 4th weekend. “It was beautiful and sweet and small,” he told Extra. “They didn’t decide to make it into a big production. It was beautiful and sincere.”

They started dating in summer of 2014. Six months later the two were engaged and nearly a year later Vergara, 43, and Manganiello, 38, married in Palm Beach.

4. Johnny Depp and Amber Heard
After a brief engagement, the two walked down the aisle in February. Depp said they wasted no time getting married because they have a deep connection. “We connect on a lot of levels,” Depp told E! News. “And she’s kind of brilliant.”

7. Declan Donnelly and Ali Astall
Dec married his girlfriend of three years in his home town Newcastle on Saturday 1 August in front of family and friends, including a whole host of famous faces.

9. Michelle Keegan and Mark Wright
On 24 May Mark Wright and Michelle Keegan married in a spectacular ceremony. The former TOWIE star and the ex-Coronation Street actress chose the historic venue of Hengrave Hall in Suffolk to say “I do”.

Jacqui Ainsley – the new Mrs Ritchie – married her famous film director love in what was the “happiest day” of her life. The 33-year-old model and mum-of-three shared a few photos from her big day on Instagram, and encouraged her guests to follow suit.

Facebook Twitter Pinterest Rss
Copyright ©2007-2022 Weddings Designed. All rights reserved.
Website Designed and Maintained by Kuka Studios
Manage Cookie Consent
To provide the best experiences, we use technologies like cookies to store and/or access device information. Consenting to these technologies will allow us to process data such as browsing behaviour or unique IDs on this site. Not consenting or withdrawing consent, may adversely affect certain features and functions.
Manage options Manage services Manage vendors Read more about these purposes
View preferences
{title} {title} {title}